Whilst trying to get feedback from audience members I received two really helpful emails from different sources offering their thoughts. Firstly Liz Macintosh from Festival Previews offered her thoughts on the subject of promoting a fringe show.

“For me, as an ordinary person who has attended the Fringe in Edinburgh for the past 30 years I want to read a performers Press Release, I want to see photos, a video about their proposed show (not a zany promo that’s all about a camera being flung around the place which makes me dizzy and tells me nothing).  You want to see something that grabs your attention, you want to engage with the artist’s or group’s personality.  You want the artist’s personality to draw you in.  This is a craft in itself which involves an artist’s most valuable asset – time!”

“This is why we set up Festival Previews – the three of us wanted more information from the artists about themselves and their shows.  You get very little from the 40 word pitch in the Festival/Fringe brochure but it’s that valuable hook to search for more information.  As a member of the public  I want to read an artist’s Press Release (and for it not to be the sole domain of formal Newspapers and the media).  See images, back links to artist’s website and numerous web pages and collated reviews.  I like to spend time doing my homework, you sort out the diamonds from the turkeys and see through the hype.”

“People value word of mouth from valued friends, face-to-face contact with the artist via flyering etc, a body or history of recorded work and honest and credible reviews.  This separates the wheat from the chaff but is costly in the artist’s time.”

The second person to email was Mark, Editor of the British Comedy Guide, who answered some of the questions from the audience feedback form…

1) What puts you off going to see a show?

Not much, as sometimes something that doesn’t sound great turns out to be brilliant. Shitty flyer design doesn’t help though.

2) What attracts you to a show?

Definitely ‘quirkiness’, the expectation of something different – there’s 100 of shows offering “great stand-up” or “five star sketches”, so the shows that attract me are the ones that suggest that if I turn up I won’t just be getting another hour of standard audience banter and yet more jokes about budget airlines. To clarify: there’s nothing wrong with doing stand-up about everyday subjects (Michael McIntyre makes it look easy, it’s not), but there’s a lot of stand-up at the festival, so acts need to try and move apart from the crowd somehow. Putting a great review on a flyer isn’t ‘standing apart’ by the way – everyone seems to find a four or five star review from somewhere they can print, and – anyway – as far as I’m concerned, if you’re coming along with different material from last year (which you should be), it’s a fresh slate in terms of how good the show is. 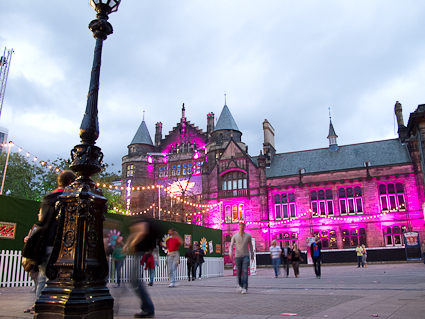 One of our team went to see this show based on its write-up alone. I got flyered with the phrase “do me a favour and put this flyer the bin over there would you” – that worked – I turned up the next day to see them because they’d managed to make me laugh before I’d even been to the show. And I went to see this show because I liked their picture.

Shallow way of picking maybe, but every show is essentially people talking, and – no matter how hard they try – flyers can’t indicate you how funny or otherwise those words are going to be… so there needs to be some criteria upon which to pick from the hundreds of similar sounding shows. So, in summary, I’d suggest sounding unique and interesting!

3) How do you think Fringe shows specifically the free ones can improve the quality of the shows they put on?

I thought the standard of the free shows I saw in 2010 was very high. Some of the venues could do with being cleaned up and the stage areas could do with better background material. I saw one show that brought along its own backdrop – nice touch.

4) How do you think shows can improve the way they promote themselves?

It amazed me how many people were flyering in the wrong spots – why stand on a busy street with people walking briskly by? Those rushing people are not going to get to whatever destination they’re heading to and then turn around and come back 20 minutes later are they? (or, alternatively,  if you are outside your own venue flyering, punters are unlikely to stand by the door for 20 minutes waiting for the show to start). Much better to choose somewhere people are milling around. Don’t approach people sitting down having a quiet drink though – that’s really annoying (Pleasance Courtyard is obviously the worst for that!)

Also, use the web! 2010 was the first year The British Comedy Guide covered Edinburgh so I know not many people knew we were covering it at first but, still, some acts did visit our site but still didn’t bother to email us to get their press release etc published (we publish all press releases in full) – the time taken to write a speculative email is minimal, we might feature you! In 2011 we’ll be on a mission to promote the best free shows, as I’ve realised many people are looking to us to find out which free shows to see (more so than the paid shows in fact), so I’d encourage acts to get in touch with us once they’ve got their press release together.

The BCG is not the only site on the net though! Facebook and Twitter both seem a good mediums through which to promote a show. Plus, I notice more people are now posting ‘trailer’ videos on YouTube – the nicely produced ones no doubt attracted people in (we happily embedded them), the badly filmed ones,  or ones with little correlation to the actual live show, shouldn’t bother though, as it probably puts people off.

Festival Previews is a website dedicated to previewing fringe shows. It’s run by three individuals, Liz, Jonathan and Ian, who enjoy the arts and technology and are using the latter to promote the former. They are a privately-owned media company based in Edinburgh.

British Comedy Guide is a vast online reference website for fans of British comedy. Every month, over a quarter of a million comedy fans use this website to find out more about British comedy.

One thought on “How to Promote a Fringe show – part 2”

© Ian Fox and theianfox, 2012. Unauthorized use and/or duplication of this material without express and written permission from this blog’s author and/or owner is strictly prohibited. Excerpts and links may be used, provided that full and clear credit is given to Ian Fox and theianfox with appropriate and specific direction to the original content.
Loading Comments...
Comment
×